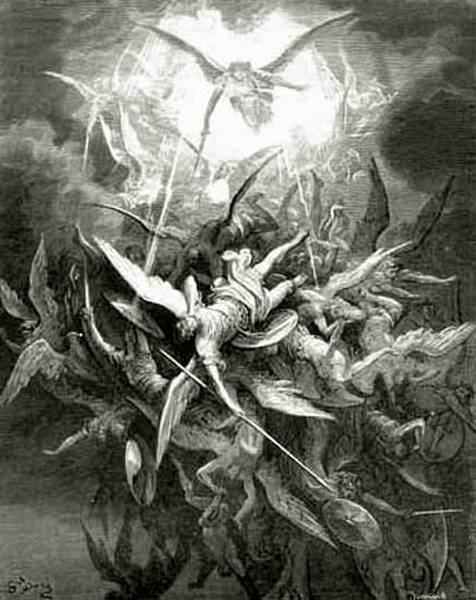 But those mine enemies, which would not that I should reign over them, bring hither, and slay them before me. – Luke 19:27

For though we walk in the flesh, we do not war after the flesh: (For the weapons of our warfare are not carnal, but mighty through God to the pulling down of strong holds;)Casting down [reasonings, rationalizations, arguments], and every high thing that exalteth itself against the knowledge of God, and bringing into captivity every thought to the obedience of Christ – 2 Corinthians 10:3-5

In our first text above, concluding Christ’s parable of the Nobleman concerning those citizens who would not accept His reigning over them (v.14), Christ commands them to be brought forth and slain before Him. Notice that it is not Christ Himself that slays them, but it is commanded of His hearers, that they slay His enemies before Him.

Who are the enemies of Christ? We are told in Scripture that ‘flesh and blood’ are not our enemies (Eph 6:12), as also above in 2 Cor 10:3, that we neither wrestle against the flesh, nor do we war by fleshly means. So, neither people, nor groups of people are the enemy. Whether believers or non-believers, whether they consider themselves our enemies, or not- people are not the enemy.

We may say that Satan and his minions are the enemy (as in Eph 6:12, etc), and there is a partial truth there, as he often needs to be unseated from positions of occupation, however, even here, we’re talking about a defeated foe- as he was defeated at the cross, and displayed openly as such (Col 2:14-15). What we’re engaged in is a huge “mop-up” operation.

But, who are the enemies Christ is having us slay before Him? Our carnal mind, and it’s opposing and rebellious thoughts. This is exactly what Paul conveys in the texts above- that the carnal mind is at enmity against God. This word enmity means that the carnal mind is in a state of hostility and opposition toward God, being against God. And as Paul states, for it is not subject to the law of God, neither indeed can be. This is exactly the reason why the Nobleman, having returned from gaining [the] Kingdom, has those rebellious citizens slain before Him, because they reject His Lordship.

We must understand the carnal mind in the same way, that it is neither subject to the laws of God, and nor can it be. Often times we think that renewing the mind is about reforming what mind we currently have, as if all that the carnal mind needed was to be reformed, and ‘dolled up’ in order to be acceptable with God. We might have better luck putting a tuxedo on a pig, and asking him to keep clean before the wedding day. Impossible.

When Scripture speaks of renewing the mind (2 Cor 4:16; Eph 4:22-24; Col 3:9-10), it is concerned in a trading of one mind for another, the carnal mind for the spiritual mind. It is not a reformation of the mind in general, certainly not that of the carnal mind, that is, the mind that is after the flesh. Rather, it is after the new man within us, the new creation that we are in Christ, it is toward that which our mind is renewed. What then is the answer for the carnal mind? Death. We must put to death the thoughts that are after the flesh. Keep in mind, however, that the carnal mind being after the flesh isn’t only in terms of sinful and wicked behaviors, but also- just as equally- in terms of performing good and religious behaviors. This is so insofar as it is thought that one can make their selves righteous and acceptable to God based on good works.

This renewing of our mind, a trading of the carnal for the spiritual, is the very means by which we put off the old man and his deeds, and put on the new man, which is created after Christ, the divine Image. The Pauline term, “the old man”, precisely means that version of our self that lived after the carnal or fleshly appetites, that which was in opposition toward God through living selfishly (Eph 2:1-5). Now, when one comes to faith in Christ, he or she at that time ceases being an ‘enemy’ of God, but their carnal or fleshly mind retains an innate hostility toward God, being our old way of thinking, likened above by Paul to a walled city with hight towers of pride, and walls of fleshly reasonings contrary to God. So, while we may love God, yet our old way of thinking (especially if religious!) is yet hostile to God.

How do we then renew our minds, and trade the carnal for the spiritual? One by one, as they arise, we bring Christ’s enemies before Him metaphorically in prayer, and slay it. How is this done? According to ‘knowledge’- which is not text-book knowledge, but is the direct knowledge (called in the Greek- gnosis), or by revelation. We need a personal revelation of who we are in Christ, and this is when the truths of the Bible become our’s. By faith, we believe what He says about us- we’re no longer a drunken dirtbag, chasing women outside of marriage, lustful and obscene. No longer are we hateful, unforgiving, unkind nor cruel. We are new creations in Christ Jesus, the old has passed away, and the new has come (2 Cor 5:17). What if we still sin? And, it’s often true that we may have a persistent sin, despite the radical change we’ve underwent, that yet ‘crops up’, or hangs on… Often times, a persistent or relentless sin is coupled with religious thinking: the carnal mind. This is what was meant by the author of Hebrews:

Wherefore seeing we also are compassed about with so great a cloud of witnesses, let us lay aside every weight, and the sin which doth so easily beset us, and let us run with patience the race that is set before us, Looking unto Jesus the author and finisher of our faith… – Heb 12:1-2a.

Every weight refers to whatever we’ve placed on ourselves, as occurs in performance based Christianity, in addition to the finished work of the cross, that we think we must do in order to be acceptible or pleasing to God. But rather than perfecting us, or making us more pleasing, instead such religious works feed the flesh, and from the same tree is not only the fruit of the knowledge of good, but also of evil (Gen 2:9, 15-17). It’s only from Christ, the Tree of Life, from which we’re to eat.

It’s therefore by the cross, as Christ took with Him our sinful self, as well as the laws underwhich we were in bondage. Having been crucified with all that, we bring each contrary thought to the fact of the cross, and acknowledge it’s slaying there. Also, it’s by the truth of His Word that each and every carnal thought is slain. As each lustful, selfish, and self-righteous thought is based in a lie- and Christ said,

Each time our personal lies (what we tell ourselves in defense of our old sins, or our religious efforts to control them) are confronted with the truth of who we are in Christ, they are brought before the Nobleman, and are thus slain. But we have to be the one to bring them before Christ the Truth, as He will not go and get them for us. Thus, the renewing of our mind, with it’s putting off the old man, and putting on the new, is our responsibility.

I pray this word blessed you today.